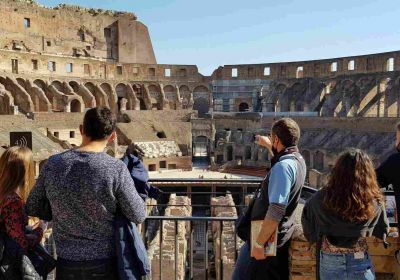 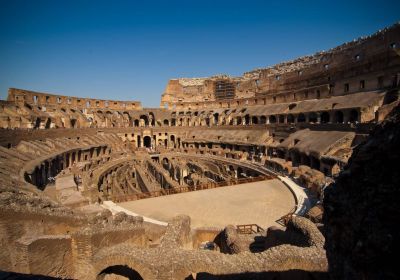 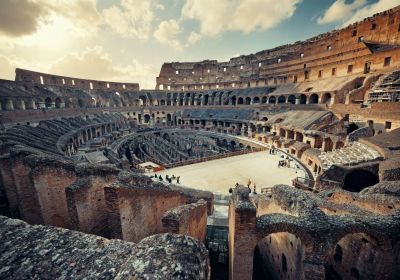 Cancel up to 24 hours before your activity starts for a full refund.
See More Tours

About the Roman Forum

If you want to visit the heart of Ancient Rome, the Roman Forum Tour is the best way to experience the history of the ancient city. You will walk down the Via Sacra, or Sacred Way, of the Roman Forum, also known as the triumphal road. This is the same path that victorious Roman generals would follow when they returned from abroad. Every stone that lies within the Roman Forum is connected to the great moments from Ancient Rome’s past.

The Roman Forum Tour will also lead you past the triumphal arches. The Arch of Titus is especially well preserved and detailed. The Arch of Constantine is also visible from the 2nd floor balcony of the Colosseum. Only a few of these incredible arches still remain, and even fewer are well preserved.

During the Colosseum and Roman Forum tour your guide will lead you through the once bustling marketplace that was ruled by the shopkeepers and moneylenders. The Roman Forum was the focal point of the Ancient Roman Empire and was home to many religious and political buildings such as the Basilica of Maxentius and the Senate House. Although this was not the Senate House in which Julius Caesar was assassinated, you will find the temple of Julius Caesar in the Roman Forum.

With so many layers of history and architecture in the Ancient City, choosing a Colosseum and Roman Forum tour is an excellent way to experience it all. You will walk the ancient roman roads with a local guide who is an expert in their field. Not only will you visit Rome’s most famous monument, you will learn the history as well. When you walk past the broken pieces of marble strewn about the valley and past ancient temples, it is hard to believe that this area was once a vast swampland.

About the Palatine Hill

An exploration of ancient Rome would not be complete without a Palatine Hill Tour. Learn about the legend of the twin brothers, Romulus and Remus, and see where their battle for the city took place. Archaeologists are always finding something new on the Palatine Hill, in 2007 an underground chamber was found that is thought to have been the Lupercal, the chamber where legend says that Romulus and Remus were suckled by a she-wolf. Of course this seems like a far-fetched idea today, but the ancient Romans truly believed it.

The Palatine Hill is one of the famous seven hills of Rome and eventually became the site of the imperial palaces.The hill was inhabited by wealthy citizens who used it to escape the heat, noise and smells of the crowded city. It eventually became the home of the emperors after Domitian built an expansive palatial complex. During the Palatine Hill Tour you will get to see what remains of this massive palace as your guide describes its ingenious design.

From the height of the Palatine you will enjoy wonderful views of Rome’s skyline. You can look down over the Circus Maximus and imagine the emperors watching the chariot races taking place down below without the need to leave their palace. From the other side of the hill you get an amazing view of the Roman Forum spreading out before you. Having a guide with you during the Palatine Hill tour makes the experience much more interesting and enjoyable.

Don’t miss the chance to explore the Palatine hill and see one of the oldest parts of the city. Having a guide makes all the difference when it comes to ancient history and architecture. Rome’s incredible history will be brought to life and your guide will transport you back to ancient roman times.

About the Colosseum, Roman Forum and Palatine Hill

There is no better way to experience Ancient Rome than by taking a Colosseum, Roman Forum and Palatine Hill Tour. Exploring what remains of the Ancient Roman empire with an official guide is an exciting and interesting way to spend your time in Rome. There is so much history and so many hidden details that you will never find without the knowledge and experience of a professional guide.

During the Colosseum tour you will have a chance to inspect its magnificent facade and check out the roman numerals above the arches. Your guide will describe why the Colosseum’s walls are covered with holes and the differences between the columns. The intrigue only grows as you enter the monument and hear about the drama and gore of the gladiator battles.

You will go back in time as you walk through the Ancient City during the Roman Forum and Palatine Hill guided tour. It is easy to imagine a bustling city center and marketplace as your guide describes what life was like in Rome during ancient times. As you walk through Roman Forum your guide will lead you past the Temple of Julius Caesar as well as the Basilica of Maxentius. Strolling up the Palatine Hill you will pass by the Arch of Titus and appreciate the intricate artistry and craftsmanship of the reliefs. The tall umbrella pine trees that are so iconic to Rome create a lovely atmosphere as your guide describes the incredible palaces that once reigned over the city. With a gorgeous view unfolding in front of you and your tour guide sharing their expertise, the history of Ancient Rome has never been more engaging.

The tour of the Colosseum as well as the Roman Forum and Palatine Hill tour combine to create an immersive and unforgettable experience of Rome’s fascinating history.

Know Before You Go

Things that are not allowed: